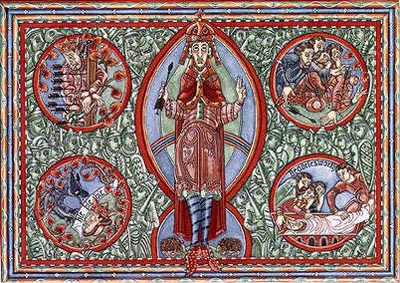 A mosaic of the martyrdom of St. Edmund. Before England was unified it was repeatedly overrun by invading Vikings from Denmark. They were pagans who terrorized the countryside, burning monasteries and churches, plundering villages and exerting their will. Their leaders offered Edmund a chance to become their vassal if he would forbid all practice of Christianity. He refused and went to war, was captured, tortured and killed. His remains were enshrined in a Benedictine monastery in a town which changed its name to Bury St. Edmonds. It has been a place of pilgrimage ever since. (source unknown)