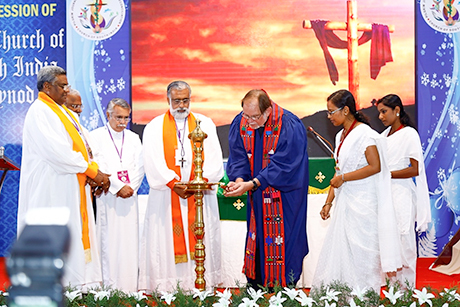 Thomas Oommen, the Bishop of Madhya Kerala, was elected Moderator of the Church of South India at its 35th Synod in Kottayam, just a few months after celebrating his own diocese’s 200th anniversary. “The boundaries of the denominations of the Christian Church must become thinner in order to proclaim Jesus in practice,” he said. He also pledged to continue to “take up the cause of ecological concerns, of the rights of dalits and adivasis and the need for gender equality. We will continue to oppose injustice, particularly where it concerns the rights of Dalit Christians.” The church was formed in 1947, the year of Indian independence, as a merger of several Protestant denominations while retaining episcopal order and polity. He will serve half-time in his own diocese and half at CSI headquarters in Chennai. (Church of South India)